21 must know facts about solar system for children 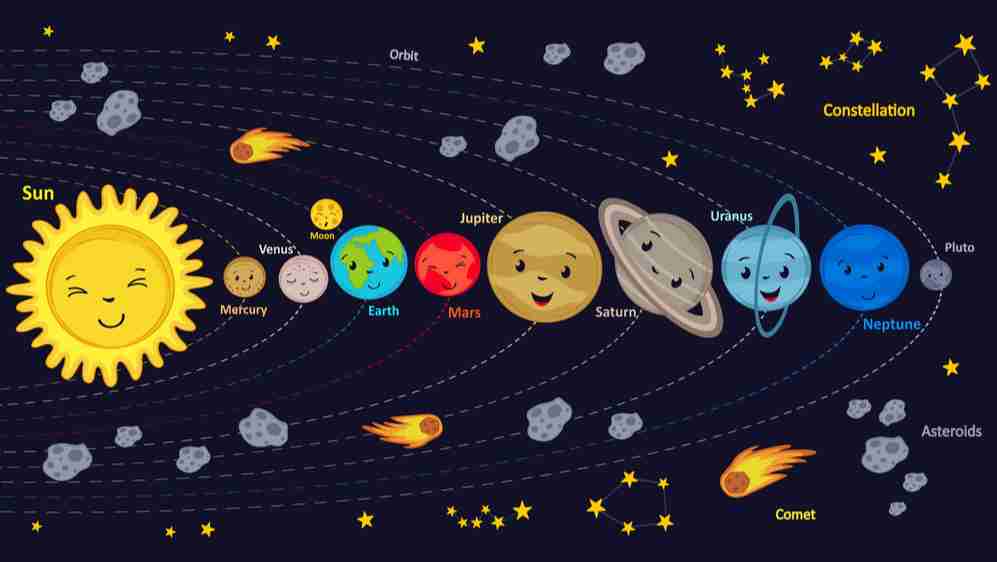 Our solar system is made up of the sun, the eight planets that orbit the sun, and countless smaller bodies such as asteroids, comets, and dwarf planets.

Have you ever looked at the stars at night and wondered about what’s up there? Space is a big place with a lot to explore. At the centre of our solar system is the Sun. Around the Sun orbit eight planets, as well as stars, bits of dust, comets and meteoroids. We live in a spiral galaxy known as the Milky Way.

Here are some interesting facts about the solar system that children should know.

1. The sun is far away from the Earth.

2. Years ago, people thought that Earth was the centre of the universe.

3. Most of the Solar System’s mass is contained in the sun.

4. The inner planets are composed of rocks and metals.

5. The outer planets are composed of gases.

6. Jupiter is the largest planet in our Solar System.

7. Most asteroids are found in a ring between Mars and Jupiter.

8. The Sun is a star – it gives off light and heat and is made up of hot gas.

9. Venus is the hottest planet in our Solar System.

10. The asteroid belt is made up of rocks.

11. Not everything in the Solar System orbits the Sun. The Moon, for example, revolves around the Earth.

13. Our Galaxy is called the Milky Way and the Sun is one of the hundreds of billions of stars in the galaxy.

15. Small asteroids regularly fall to Earth or burn up in the sky as glowing meteors.

17. Jupiter has the biggest ocean on any planet.

19. Spacecraft have visited every planet.

20. Saturn has a hexagonal-shaped storm

21. There are rocks found on planet Earth that came directly from Mars.

A great way to get kids to remember these facts is by making them into flash cards that can be played with whenever curiosity strikes.